“Frustrated, fed up, sick of it, tyranny, Fascism and when is it going to stop” are just some of the language we hear from public land users and small miners when they describe what is happening with the USFS, DFG, BLM and EPA agencies.

These agencies which were formed to “manage” our lands and wildlife, not to impose impossible regulations designed to stop fundamental rights, entire industries or destroy someone’s passion. But that is precisely what these entities have done.

What if you could get your hands on the oppositions playbook? It does exist, and we are going to show it to you.

In order to understand what the politicians do, and we mean on both sides of the political spectrum since we honestly cannot identify with either party, one has to understand and know a man by the name of Saul Alinsky. As you read on, you will find that Alinsky was the first real radical leftist to organize, and starting in Chicago (ya, imagine that) he started in on the labor movement and the use of Unions to achieve the political change he desired. Saul Alinsky was a neo-marxist and in the 60’s and 70’s was behind much of the original “hippy movement” and hatred of our military. By the way….Hillary Clinton wrote her college thesis on Saul Alinsky and looked at him as an idol. 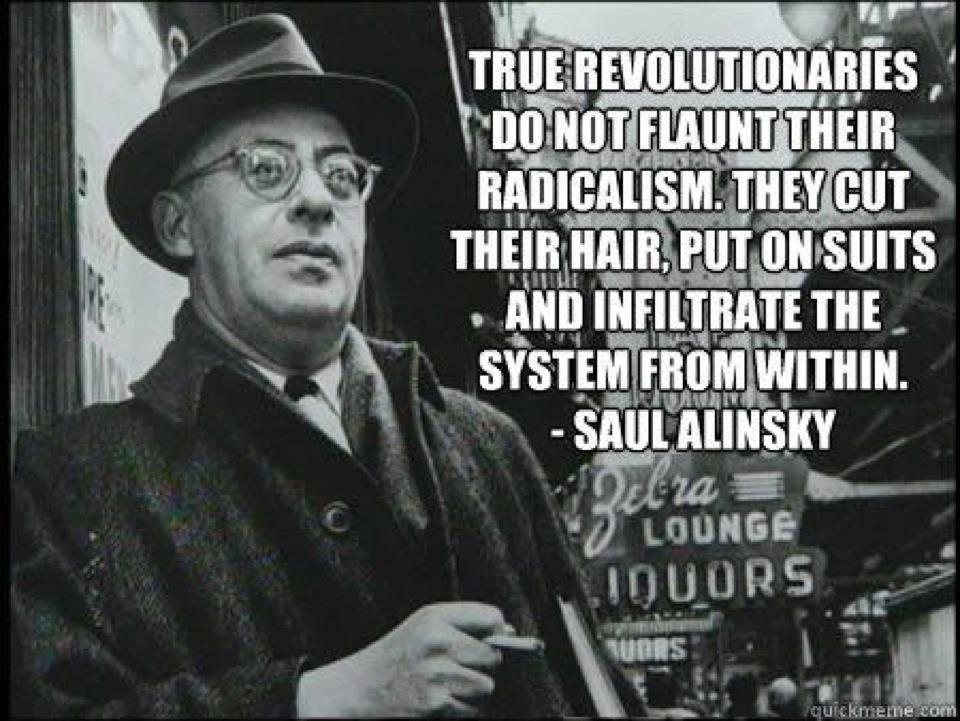 Alinsky wrote “Rules for Radicals”, the bible, or handbook if you will for the political left, socialists, communists, marxists and Fascists to follow if they wanted to bring about change and achieve that ever elusive, failed every time Utopia they think is right around the corner by controlling every aspect of your life. After reading his simple rules (below) it will become clear just why these agencies were gutted by Mr. Obama and the upper management was replaced with his hand selected people……to carry on his political ideology.

Understand that their goal is to divide, to make you feel defeated, to make you angry and hate your neighbor. These are all by design and there is one thing to bring a bit of solace to you, they truly only represent about 18% of the populace….no matter what kind of poll NBC does that tells you otherwise. They control the media except for Fox News and a few highly popular internet sites like Drudge and Breitbart and those media outlets continue their narrative.

Now is the time to stand even more united, joining hands with fishermen, hikers, hunters, other gold mining clubs, groups and people. Together we stand, divided we fall, and their singular goal is to divide all of us. Don’t take the bait. Get the message out by educating yourself and that is what AMRA’ mission statement is, to educate you not just on your rights, but how this whole behemoth called Government works.

Pay close attention to rule #1. This rule, which we quote often during our lectures, is the most important. Giving an illusion of power (that they don’t have) is just as powerful as having that power. Sound like the EPA? Yes. The EPA is currently stating they have the authority to require you purchase a “pollutant discharge permit” for Idaho. This has been decided by many, many cases including the US Supreme court with the soup pot theory which Ginsberg (SCOTUS Justice) stated that if you dip a ladle into a pot of soup, lift it up and pour it back in, are you adding anything? NO. but these agencies rely on fear and intimidation to drive their political agenda. The USFS is no different. They claim you need a PoO, a Plan of Operations to dig with a shovel. Not true.

Very shortly, we are releasing a very comprehensive understanding of the 2810 USFS mining regulations where we define their rules, and the laws which bind them. We also include case law which conclusively prove they do not have the authority to demand you get all these ridiculous permits.

* RULE 1: “Power is not only what you have, but what the enemy thinks you have.” Power is derived from 2 main sources – money and people. “Have-Nots” must build power from flesh and blood. (These are two things of which there is a plentiful supply. Government and corporations always have a difficult time appealing to people, and usually do so almost exclusively with economic arguments.)

* RULE 2: “Never go outside the expertise of your people.” It results in confusion, fear and retreat. Feeling secure adds to the backbone of anyone. (Organizations under attack wonder why radicals don’t address the “real” issues. This is why. They avoid things with which they have no knowledge.)

* RULE 3: “Whenever possible, go outside the expertise of the enemy.” Look for ways to increase insecurity, anxiety and uncertainty. (This happens all the time. Watch how many organizations under attack are blind-sided by seemingly irrelevant arguments that they are then forced to address.)

* RULE 4: “Make the enemy live up to its own book of rules.” If the rule is that every letter gets a reply, send 30,000 letters. You can kill them with this because no one can possibly obey all of their own rules. (This is a serious rule. The besieged entity’s very credibility and reputation is at stake, because if activists catch it lying or not living up to its commitments, they can continue to chip away at the damage.)

* RULE 5: “Ridicule is man’s most potent weapon.” There is no defense. It’s irrational. It’s infuriating. It also works as a key pressure point to force the enemy into concessions. (Pretty crude, rude and mean, huh? They want to create anger and fear.)

* RULE 6: “A good tactic is one your people enjoy.” They’ll keep doing it without urging and come back to do more. They’re doing their thing, and will even suggest better ones. (Radical activists, in this sense, are no different that any other human being. We all avoid “un-fun” activities, and but we revel at and enjoy the ones that work and bring results.)

* RULE 7: “A tactic that drags on too long becomes a drag.” Don’t become old news. (Even radical activists get bored. So to keep them excited and involved, organizers are constantly coming up with new tactics.)

* RULE 8: “Keep the pressure on. Never let up.” Keep trying new things to keep the opposition off balance. As the opposition masters one approach, hit them from the flank with something new. (Attack, attack, attack from all sides, never giving the reeling organization a chance to rest, regroup, recover and re-strategize.)

* RULE 9: “The threat is usually more terrifying than the thing itself.” Imagination and ego can dream up many more consequences than any activist. (Perception is reality. Large organizations always prepare a worst-case scenario, something that may be furthest from the activists’ minds. The upshot is that the organization will expend enormous time and energy, creating in its own collective mind the direst of conclusions. The possibilities can easily poison the mind and result in demoralization.)

* RULE 10: “If you push a negative hard enough, it will push through and become a positive.” Violence from the other side can win the public to your side because the public sympathizes with the underdog. (Unions used this tactic. Peaceful [albeit loud] demonstrations during the heyday of unions in the early to mid-20th Century incurred management’s wrath, often in the form of violence that eventually brought public sympathy to their side.)

* RULE 11: “The price of a successful attack is a constructive alternative.” Never let the enemy score points because you’re caught without a solution to the problem. (Old saw: If you’re not part of the solution, you’re part of the problem. Activist organizations have an agenda, and their strategy is to hold a place at the table, to be given a forum to wield their power. So, they have to have a compromise solution.)

* RULE 12: Pick the target, freeze it, personalize it, and polarize it.” Cut off the support network and isolate the target from sympathy. Go after people and not institutions; people hurt faster than institutions. (This is cruel, but very effective. Direct, personalized criticism and ridicule works.)

To know one’s enemy is to defeat them. Know your enemy and their tactics.

2 thoughts on “Understanding our opposition”