Breaking News
Home » All About Mining » How long does it take to get a mining plan approved?

How long does it take to get a mining plan approved?

From our good friend Justin Karr in Washington:

The average length of time it took BLM and the Forest Service to complete the first three steps of the mine plan review process and approve 68 mine plans from fiscal years 2010 through 2014 was approximately 2 years. However, the time varied widely, ranging from about 1 month to over 11 years, among the 68 mine plans we reviewed. For example, 1 mine plan took less than 1 month for Forest Service officials in Washington to review and approve. A Forest Service official told us this was, in part, because the mine was located in an area with existing mining operations, and the Forest Service determined that there was no need to conduct additional NEPA analyses. In contrast, another mine plan in Idaho took over 11 years for BLM to review and approve, primarily because of disagreement with the operator over what needed to be included in the mine plan, according to BLM officials. Figure 4 shows the time frames for approving these 68 mine plans. 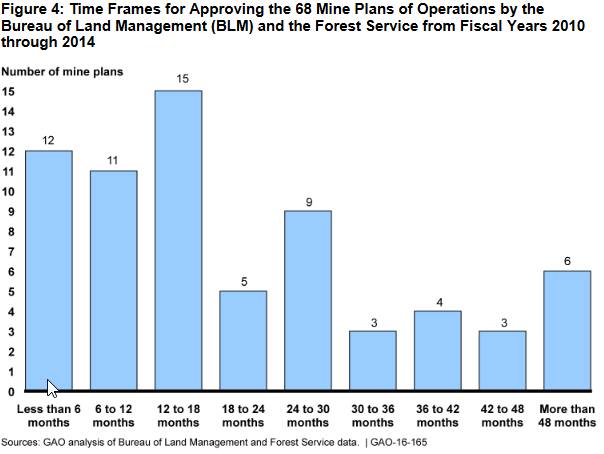