A few weeks ago we brought you a story of 8 miners, one a claim owner allowing his buddies to mine with him and of a DFW (CA Fish and Wildlife) officer confiscating their foot valve on their highbanker alleging they were violating the 5653(g) section of the DFW regulations.  The miner was told he was being cited, but as of the writing of this story, still has yet to receive any citation, just the confiscation of his equipment and no idea when he can get it back.  They were made to hike out of the canyon, one injuring himself just to retrieve their ID’s so the DFW agent could identify them.  The initial contact by the DFW officer was, as stated by the DFW officer was because he heard there were some people “claim jumping”, we’ll come back to that in a moment.  They were told they had to remove ALL mining equipment from the claim immediately or he was bringing in a helicopter to confiscate the rest of it. 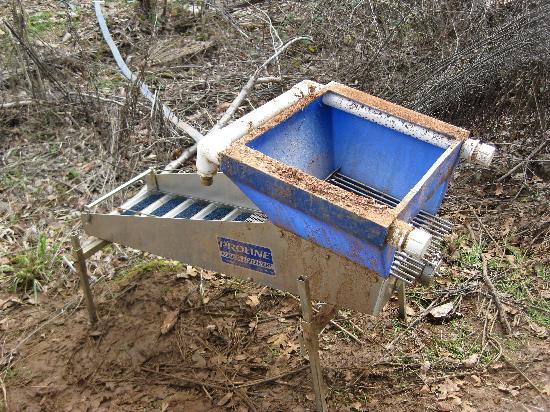 First of all, the 5653 regulation are a copy of SB637, a bill introduced by Senator Ben Allen from Hollywood which requires suction dredgers to obtain a permit from the CA Water Board.  Since the passing of this bill a year and a half ago, the CA Water Board still does not offer any kind of permitting structure.  They assured us “they are working on it”.

Last night, we received a call from yet another claim owner/miner in Plumas County CA where his highbanking equipment was confiscated just this past Saturday by a DFW Law Enforcement Officer.  He was not cited, just had his equipment taken by the DFW agent. Again, the DFW LEO (Law Enforcement Officer) stated they were violating the 5653(g) of the regulation.  Here is a text of the addition which was added to 5653:

Defines for the first time by statute what it means to use vacuum or suction dredge equipment, otherwise known as suction dredging, as the use of a mechanized or motorized system for removing or assisting in the removal of, or the processing of, material from the bed, bank, or channel of a river, stream, or lake in order to recover minerals; but also clarifying the definition does not apply to, prohibit, or otherwise restrict nonmotorized recreational mining activities, including panning for gold.

We spoke to the LEO personally who confiscated the first miners foot valve and he told us a highbanker  “aids”‘ in the processing of material, so therefore his interpretation of the law is that it is illegal.  We asked him specifically where he gets the authority to enforce who mines on someone’s mining claim and when did DFW obtain the authority to enforce a civil matter.

Let’s go over these individually:

It is not the job of any LEO to “interpret” any laws.  Their job is to enforce state law and state regulations as written.

The 5653 regulations very specifically target, name and pertain to “suction dredging” not high banking, panning or driving a truck.

I asked the LEO about a scenario.  I told him “sometimes I drive an 87’ Toyota pick up and use it to haul my mining equipment and highbanker around.  I use this truck to AID me in the processing of material, under your interpretation, are you going to confiscate my truck if I’m driving it with my equipment in the back?”.  He said “see Shannon, there you go, now you understand how complicated this is”.

It is not complicated, nor illegal.  The law and regulation states, very, very clearly that it pertains to suction dredging, not panning, highbanking or flying a plane.  To compare a highbanker to a suction dredge is like comparing a Prius to a log splitter.

A highbanker does not suck materials from the bed, stream or bank.  It is a water pump period.  Just like the one on a jet boat or the pump a farmer uses to pump water to his crops.  Are they going to go an confiscate every jet boat on Shasta Lake or running on the American River?  I think not.

He told me “a judge ruled we could enforce claim jumping” but also stated, when asked who the judge was “I don’t recall”.  First of all, who mines on my claim is purely a civil matter.  Meaning….if I own a claim and someone else is mining it, it is NOT the job of DFW, BLM, EPA or USFS to even inquire if they have permission to mine on it, we had this same issue with the USFS and are suing them as a result of this, and them pulling a Taser on a miner when asked for ID.  It is my obligation to patrol, police and enforce who mines on my claim.  For example, if I caught someone mining my claim without my permission, it is my responsibility to make sure I have marked the claim clearly with corner markers and some form of discovery monument.  It is then my responsibility to contact the Sheriff of the county in which the claim is located, provide that Sheriff with my real property mining claim documents showing I am the owner and the person does not have permission to mine it.  It is a violation of Federal law to claim jump.

There is a matter of what is known as “probable cause”.  An LEO or any officer must have probable cause that a crime is being committed, is about to be committed or has been committed.  In this case, the LEO’s justification for initial contact was “claim jumping” and completely outside their authority.  This is alarming.

You may be familiar with the 4th Amendment to the Constitution of the United States, something we proudly have on the side of our AMRA truck:

the right of the people to be secure in their persons, houses, papers, and effects, against unreasonable searches and seizures, shall not be violated, and no Warrants shall issue, but upon probable cause, supported by Oath or affirmation, and particularly describing the place to be searched, and the persons or things to be searched.

There are a multitude of cases on probable cause, the primary being Terry v Ohio in 1968.

We met with Tom McClintock’s office immediately after the first incident and also reached out to Assemblyman Brian Dahle’s office.  Dahle’s office was very helpful and immediately opened up a dialogue with DFW inquiring as to what authority they had to confiscate equipment from legitimate miners when it does not pertain to the regulation or law.  The response from DFW is the same as the LEO, they cite 5653(g) saying it “aids” in the processing of material.  At their request, we provided a letter from our attorney specifically outlining what the bill’s intent was, that the header on the bill and regulation say “suction dredging” and that the regulation is identical to the bill (SB637).  Under both, it clearly states it pertains to “suction dredging” and suction dredging alone.

DFW is ignoring the header on the bill, the regulation and our letter.  Now, with this newest confiscation, without any citation they have crossed into a new realm of illegality in our opinion.  If I came onto your 30 acre property and told you water pumps were illegal and I’m taking it, here’s a receipt for it, what would your response be?

We are demanding a meeting with DFW.  This is not just infuriating, it is dangerous, illegal and violates an American citizens civil rights.

We will keep you posted on this very important and alarming case here in California.

Please consider making a donation to AMRA, or joining as a member so we may continue this fight for our very rights.