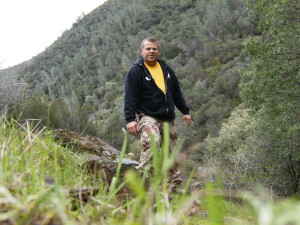 By RUSS BALBIRONA For the GPAA
There appears to be a new ally in the trenches with the miners and outdoor- loving public who are fighting to protect their rights to access public lands. The American Mining Rights Association mission statement reads: “American Mining Rights Association is a non-profit which advocates for use of public lands by the people and for the right to prospect and mine on those public lands. Our mission is to inform the public and its members on what is transpiring in America as it pertains to these rights and the ability to use our public lands through facts and information.” In a recent phone interview, AMRA President and CEO Shannon Poe said he is committed to the cause of keeping public lands open to mining. Like so many others with the passion for prospecting, Poe was mining before he had reached  his teens. “I was 12 when I was first exposed to mining and I’ve always loved it …” he said. As an adult, Poe never lost his passion for mining. On the weekends, his business attire hit the floor as he dashed out in denim jeans and boots for an enjoyable time looking for gold. “I wore a suit for 20 years. I got sick and tired of it!” he said. In 2004, Poe moved to Sacramento, California … “right in the heartland of the Mother Lode,” he said with a chuckle. By 2007, Poe decided to drop the suit and tie off at the cleaners for good and attempt to make a living as a full-time  prospector. “We did real good where we could dredge … then the dredge moratorium hit.” Poe was one of six original plaintiffs to join the lawsuit to try and stop California’s statewide dredging ban, otherwise know as Senate Bill 670 as signed into law by former California Governor Arnold Schwarzenegger. Poe donated his own money to Public Lands for the People. “I really believed in what they were doing,” he said. Over the years, Poe was perplexed by the lack of information available. “My biggest frustration was not knowing what was going on in different states in regards to mining bills,” he said . From his frustration, Poe and partners began to form the foundations of AMRA. “We thought we would, for lack of a better term, do some community organizing,” Poe said. “There are a lot of
groups out there that try to go off small donations and fight their own private battles. We thought, ‘Why not try to unite the mining industry into a unified source of information?’ ” AMRA is actively picking up claims through purchase and donation all in an effort to not only provide its members with access to these claims, but to preserve these claims as well.  “Instead of giving away T-shirts or bumper stickers, we decided to open up our claims to people who donated $200 or more,” Poe said. “This money (from donations) goes directly into a legal fund that is specifically for fighting for public access rights. It’s just a way we thought we could help fill the coffers.” “A lot of people don’t realize how much money the GPAA gives to the is- sue of public access rights. They (GPAA) don’t even ask to take credit for it and that’s something we want to give the GPAA credit for,” said Poe. AMRA is a new non-profit and is in the process of reaching out to likeminded organizations like the GPAA. “We’re certainly not competing with the GPAA, quite the opposite actually. We are all after the same goal. We are here to help the GPAA,” he said. Poe expressed that although he’d like all visitors to AMRA’s website to become a member, it isn’t necessary. “It doesn’t take a donation to be informed and that is truly our goal, to inform and educate … and they can obtain that when they come to our website.” For more information about AMRA, go to their website: https://americanminingrights.com
Russ Balbirona is a freelance writer and treasure hunter based in Las Vegas. He can be reached through his blog at www.treasurebone. blogspot.com