Yet another USFS LEO gone rogue 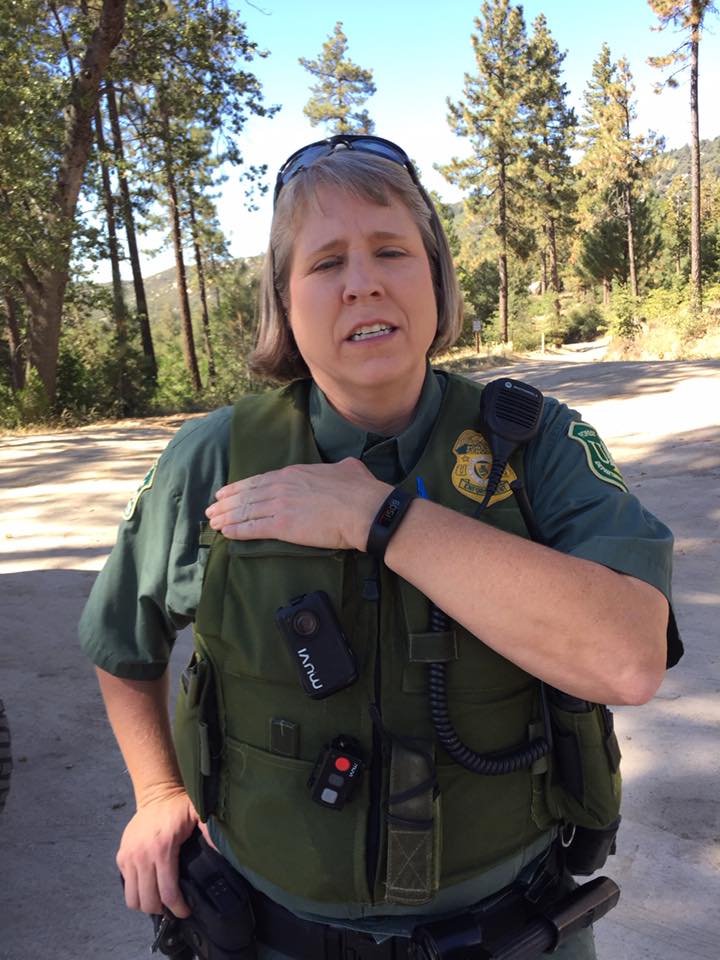 Recently, we were made aware of yet another incident by a USFS LEO operating outside the boundaries of their capacity within the USFS. The incident involves LEO Merrill, and as can be seen here, she is either embarrassed that she is being filmed, or she is attempting to conceal her identity because she knows she has overstepped her authority. As Cmdr. Wears will recall, three other USFS LEO’s in the Stanislaus NF overstepped their authority earlier this year and not only pulled a Taser on a man gold panning in a creek, but randomly, and without probable cause, stopped over a dozen public land users by blocking their egress, demanding these occupants put their hands on the hoods of their vehicles, then illegally searched these people’s property. Since that time, the USFS complaints to us have escalated to the point where it is not just a concern, but absolutely stunning it their disregard for the rights of the citizens who pay their salaries.
The USFS was created to “manage” our public lands. Our public lands mean the public owns them and the USFS takes care of those lands for us. You, your LEO’s, the District Rangers and even the Forest Supervisors work for us, not the other way around. It is abundantly clear there are some fundamental problems within the enforcement division of the USFS. We have documented many, many cases involving the USFS LEO’s stepping way outside their constitutional authority. When we filed the complaint against the LEO’s in the SNF, Cmdr. Wears simply replied, nothing to see here, they have the authority to check on mining operations. Well Ms. Wears, as I stated to you, you completely ignored the dozen other incidents of 4th Amendment violations by your LEO’s. Capt. Briot, will you ignore the behavior of your LEO’s like Cmdr. Wears?
I’d like to issue this small piece of advice for both of you. Ignorance of the law, your own regulatory instruments, language, litigated cases involving fundamental rights like the 4th Amendment and our Constitution is no excuse to violate someone’s fundamental rights. And it is behavior like this with LEO Merrill which has forced us to take action. We are adding this incident to the dozens already documented incidents involving USFS LEO’s and as stated to Ms. Wears earlier this year, we are going to seek justice, civilly against all who ignore the law, the USFS authority and those who turn a blind eye. This is not a threat, but a sincere fact. Failure to investigate this incident, and to hold Ms. Merrill accountable for obvious and blatant violations against the public is and will expose those who fail to perform these duties to civil liability. And it is that civil liability we intend to pursue.
I demand an investigation be opened immediately on the behavior of Ms. Merrill and that she be disciplined severely for her actions in this matter. I am also requesting a formal response be sent to me on the findings of this investigation.
Sincerely,
Mr. Shannon Poe
President, AMRA American Mining Rights Association