Update on the hearing at the Capital on SB1222

From the desk of Shannon Poe, President, AMRA:
I’ll get to the meat of what transpired at the state capital yesterday shortly, but first of all would like to thank many who supported this bill and the immense amount of time which was put into it:
Uniting is the key to any success. 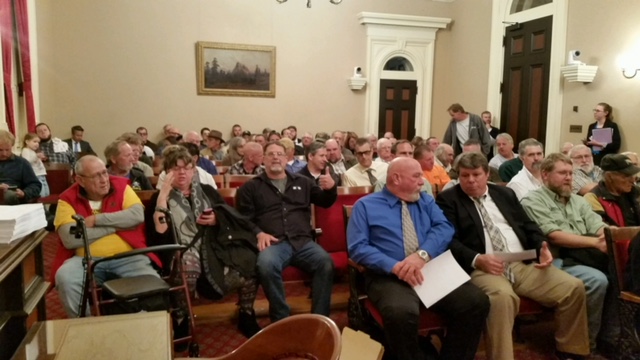 Senator Jeff Stone and his entire staff
AMRA’s staff and especially Stacy, Jere and Connie
Western Mining Alliance and Pacific Crest Alliance
GPAA and especially Kevin Hoagland
Numerous other GPAA chapters throughout California
Mike West
Robert Guardiola and Delta Gold Diggers (GPAA)
Proline Mining
Pat Keene and Keene Engineering
Roaring Camp
Motherlode Goldhounds
Central Valley Prospectors
East Bay Prospectors
UPI
Mariposa County
Riverside County
Sheriff Doug Binnewies (the best Sheriff ever)
Inland Empire Prospectors and Miners
Kevin Bell and Aurora Mining
And the numerous AMRA members, small miners, clubs, counties and businesses who wrote letters and showed up at the capital to have their voices heard, which are too many to list.
Sadly, PLP opposed supporting this bill.
We presented the simple and undeniable fact that SB637 (Ben Allen’s Suction Dredge Bill of 2015) was a defacto “ban and prohibition” on all forms of mining. Being a miner and being relegated to only panning is not mining. It is prospecting and under the law, actually a Grant given to the miners by Congress in 1872, we have fundamental and inalienable rights to mine, not simply prospect. Relegating us to simply panning as a way to mine would be like the CA government passing a law saying building contractors can now only use a hammer and handsaw to build a home. Panning has never been used as a method of mining, it is the first thing a miner does, and the last, but is not a method of mining.
The vague language in SB637 essentially criminalized the following:
high bankers
dry washers
metal detectors
track/motorized wheel chairs
post hole diggers
generators used at night in the desert
air compressors for sniping
The Cube
Tiny, handheld waterpumps
Recirculating sluices
And other equipment we could list for 5 pages….
After some robust debate, Senator Ben Allen agreed his language in SB637 needs to be modified. The Chair of the Natural Resource Committee “set aside” the bill and asked the parties to sit down and redefine the language so as not to be prohibitive. This is quite profound as with a Democrat majority on this committee, they could have easily voted it down strictly on party lines but the argument of this being a ban had a sincere impact and was, as they could see, true. This highly concerned all of them.
What this means is AMRA, Senator Stone, Senator Allen and Izzy Martin (Sierra Fund) will sit down in a room and sort out changes to the language to make these items which are NOT a suction dredge and are NOT used in fish habitat legal again as they should have been.
Ms. Martin (Sierra Fund) predictably presented her argument during testimony that she was worried SB1222 would degrade fish and fish habitat. Pretty hard to keep that argument when running a dry washer in the Mojave desert, or a metal detector with a 6 year old grandson on a bench placer above the river. How many desert fish do you know of? How about tub fish, ever hear of one of those? They apparently live in your tub while running a cube or recirculating sluice.
There was also robust debate on the California Water Board and it’s permitting scheme process which SB637 required on its passage. It is has been 2 years and 4 months since Governor Brown signed SB637 and still no permitting process. The CAWB has been less than responsive to miners requests for updates and status. Senator Vidak (R) kindly pointed out, the simple and undeniable fact that the CAWB is not moving on this process and this too is a ban and prohibition on suction dredging for this delay. They are dragging their feet on permitting suction dredging. We have been informed by those working within the CAWB on this project that the Board of Directors of the CAWB voted unanimously last summer that dredging IS DEMINIMUS and should be permitted. Due to changes in CAWB staff (an appointment by Governor Brown) that process of permitting was halted last September. We all know it should be permitted under the law, with the science proving it is not harmful to fish and fish habitat. It is time to get this ball rolling.
We are very, very actively working on this folks, very actively.
So as we move forward over the next few weeks, meeting after meeting with the two Senators, Ms. Martin and then the CAWB over this vague language, the permitting scheme required, please know we will be doing everything we can to represent you, to fix this language and bring relief to the CA mining community. We promise to keep you informed and abreast of how this progresses.
What you saw here folks is miners being tired of being run over and going on the offense instead of simply waiting for the next shoe to drop and how we must then again defend our rights.
We could sure use your support. Please make a donation to the legal fund or join AMRA today.