By now many of you have likely heard the penalty phase of the litigation out of Idaho over suction dredging was decided by the judge. This does not mean this case is over.
This stems from AMRA’s President standing up to the EPA on their requirement for an NPDES permit (a pollution permit) even though a suction dredge does not add any pollutant, nor does it pollute. 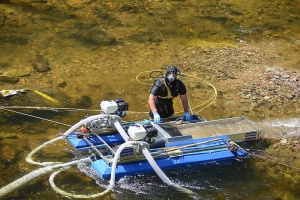 This is our statement on the case:
Back in 2013 I was contacted by several miners in Idaho who stated the EPA under Obama’s new WOTUS rule and the Clean Water Act were being harassed by them and were being told they needed to obtain an NPDES permit (National Pollution Discharge Elimination System) for the non-navigable SF Clearwater river. The mining claims on that river had been dredged for over 60 years without incident and there were no claims of a fish habitat being damaged, nor the cause of any reduction in fish runs. The state of Idaho regulates suction dredging in their state using the guidelines set forth by the CWA.
The suction dredges we use operate with small, lawnmower sized engines and operate essentially like a jet boat motor does, it just pumps water, creates suction on a hose and vacuums gravels up from the stream bed.
Since a suction dredge scientifically does not pollute, we looked at the legality of this move by the EPA and it was determined based on case history and factual science that it should be challenged. We obtained a claim on that river and also obtained the state permit, the only permit Idaho stated was needed to dredge their river. Mining claims are also real property and water rights for the purpose of mining is granted by federal and state law.
In the CWA under the EPA NPDES guidelines there are, to my knowledge 126 listed toxic pollutants. The activity of suction dredging adds none of those pollutants listed but does in fact remove a few of them from the water. As the Supreme Court stated when it comes to a water transfer, which is what a suction dredge does: “if one takes a ladle of soup from a pot, lifts it above the pot, and pours it back into the pot, one has not ‘added’ soup or anything else to the pot.”
A suction dredge lifts gravels from one location in a stream bed, runs those gravels across a sluice box and redeposits those gravels back into the same stream bed a few feet from where it was lifted. Nothing is added, but other pollutants and heavy elements are trapped in the sluice and removed from the water way like mercury, lead and gold. The gravels are cleaner when redeposited then when they were on the bottom of the river.
I dredged there three separate years and was never cited by the EPA for any violation of the CWA or polluting any water way.
The dredge season runs from July 15 to August 15 when no fish are spawning in the river. To my knowledge, there has never been a documented case of a single fish ever being harmed by the activity of suction dredging. However, there are many examples of states and various agencies using suction dredges to create fish habitat. While I was there in 2018, a fisheries biologist with the USFS who was tasked with overseeing the dredging activities in the river that year stated to me “I wish you guys could dredge bank to bank because you create perfect fish habitat”. When we completed the required reclamation by the state, we returned the river back to nearly the exact state it was in before we arrived, so well in fact that the Idaho Department of Water Resources could not determined where we dredged and we had to point out where our activity was.
In 2018, The environmental group ICL sued me claiming my 100 foot plume of sediment was polluting their river. It brings to mind every spring run off or flood event where rivers turn chocolate milk in color for miles and miles, but a 100 foot plume of sediment already in the river was claimed as a pollutant. We had video of an operation on a tributary to the SF Clearwater where the government was operating large excavators in the water way to straighten a section of a tributary river ironically named “Crooked River” through a wet land/meadow. Every day they operated that heavy equipment in the water, the sediment plume would travel down the river for over 30 miles with zero visibility in the the upper part near where they worked. A few years ago when we had the epic flooding here in California which devastated Groveland and impacted Mariposa County, I drove to the bay area the day after. That flood even turned the bay muddy, 60 miles from the source.
The judge presiding over the case disallowed much of this testimony and other evidence we wanted to present and ruled in summary judgement for ICL. We believe it was an unjust and unfair trial.
We went to Idaho to challenge what we feel is an extreme over-reach by the EPA, like the very recent West Virgina Clean Air Act case where the Supreme Court agreed the EPA completely violated their authority. There is a case today, also from Idaho on the CWA which oral arguments are being presented at the Supreme Court (Sackett) where the EPA, in our opinion has again over-stepped their authority. This was a family who purchased property in Northern Idaho and wanted to build in a meadow on their property. The EPA claimed it was protected under the CWA, cited and fined the family and the case if finally being heard as we believe it too is an injustice to the family’s rights.
I dredged with every permit the state required and followed every rule and regulation they set forth and firmly believe the EPA has been acting as Congress by making regulations, essentially laws and the courts will recognize this.
Shannon Poe