We just got back from Southern California where we met with several groups and clubs to prospect the San Gabriel River (in opposition to the USFS and Mr. Obama’s Executive Action declaring it a National Monument and off limits to panning). It was hosted by East Fork Gold Prospectors and was also a fundraiser for Brandon Rinehart.

AMRA accepted donations for shirts (which we donated) and EFGP accepted donations for items they gave away. Collectively, we raised $1,171.00 for Brandon’s defense! We wanted to thank each and every person who donated to Brandon’s CA Supreme Court case which will likely be heard in January. We spoke to Brandon and he is elated folks would donate to his case without even knowing him. Brandon is a very sincere and humble man, we are proud to call him our friend. Every penny taken in is going directly to his legal fund. 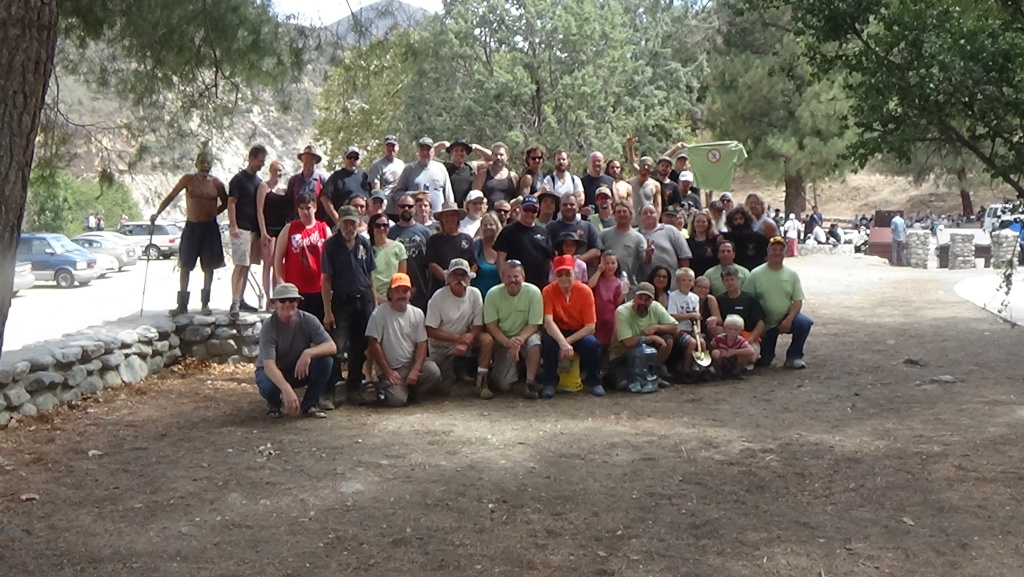 Shortly after we arrived at the river, two USFS LEO’s (law enforcement officers) arrived and told the group they could be cited for “intent to prospect”. Well, there’s a new one. After a half hour sit down with the LEO’s, they decided to allow us to prospect on the river. We filmed this entire exchange and will be posting it later today for all to view. They informed all of us we could not sell anything or risk citations and could not hold a “raffle” or face citations. We were also lectured on causing a “significant disturbance” while participating in any prospecting within the river.

Interestingly, two large commercial buses showed up with over 100 immigrants. The USFS did not, to our knowledge speak to this huge group of people who were there to baptize many of the attendees in the river. They were allowed to sell openly their wares and allowed to fill dozens and dozens of garbage bags with sand and use these garbage bags to dam up the river for their ceremony. We are not demeaning the baptism process, just pointing out the hypocrisy of the USFS. We get threatened with prosecution, while this other group gets a complete pass. We also picked up all the trash these folks discarded along the road, the park and the river. We do want to say these immigrants were very respectful of us and were very kind-hearted people.

Saturday evening, we spoke at the Route 66 Club meeting carrying our message of unity and education. We were warmly welcomed by these folks and had a great time. Once again, we either unite as a giant powerful force, or be divided and conquered.

Tomorrow, we will be on Bobby Freedom’s radio program and encourage all of you to tune in as we will be discussing all the problems we currently face, will be telling stories and it should be a great time for all. The show starts at 4pm (Pacific time) and is found here: http://www.goldradiotalk.com/ Join us at 4pm.

Next Sunday, we will be joining WMA, Western Mining Alliance at their huge event up in Nevada City and are joining the speakers to discuss the state of small miners in America. We will be posting more about this event later, please think about attending this event (also posted on our website) next Sunday, September 20th.

We shot a new video last week of us mining a bench placer and hope to have this out later this week.

We are in the final stages of planning and posting our annual dinner in December and folks, this is going to be huge and the seats will be limited to about 350. Stay tuned on this one……..we are giving away so much stuff, we can’t even list it all. Ounces of gold, a brand new 4″ Proline dredge, an all inclusive week long trip to Roaring Camp, Sierra Blaster system, over a dozen new guns and much, much more. Live music, videos and fun all night long. We have put together packages for groups of people and we cannot wait for this event. It will be December 12th in Oakdale CA.

Thanks again for all the support.