Many of you have heard of the treasure a friend and I found a few years ago metal detecting just out of Greeley Hill, very near our claim Albie 1. For those who have not heard it, here it is along with some of the pictures I finally found.…

We had just picked up a new claim and were metal detecting the creek bed. There wasn’t much water, just a few pools in the bedrock. We had found two nice pickers sitting in some depressions in the bedrock right in the creek. I had given my buddy Joe the detector and I started to sample the roots of a blown down giant oak tree in the creek bed with his wife Alicia.

Joe had moved up out of the creek about 100 feet into a small alcove of bedrock at least 40′ above the water line and was detecting. For those who own detectors, and use them a lot, you get used to sounds your own detector makes. My detector started making the classic “gold or lead” beeps when Joe was running it near this little outcropping. Lots and lots of beeps. It caught my attention and I watched as he took both hands and dug into the dirt. He pulled out a gold watch……..a very old gold watch. He let out a yelp and I ran up the hill to him. I reached down and did the same thing Joe did, I just ran my hands over the dirt like a dozer to move the material out of the way. The first thing was pain, pain of an 1800’s era earing sticking out of my finger.

We found many items in the first few feet and decided to set up a screen system and excavate the area.

We don’t know who buried it, but it was obviously buried. Perhaps it was Murrieta when he was robbing the stages back in the day? 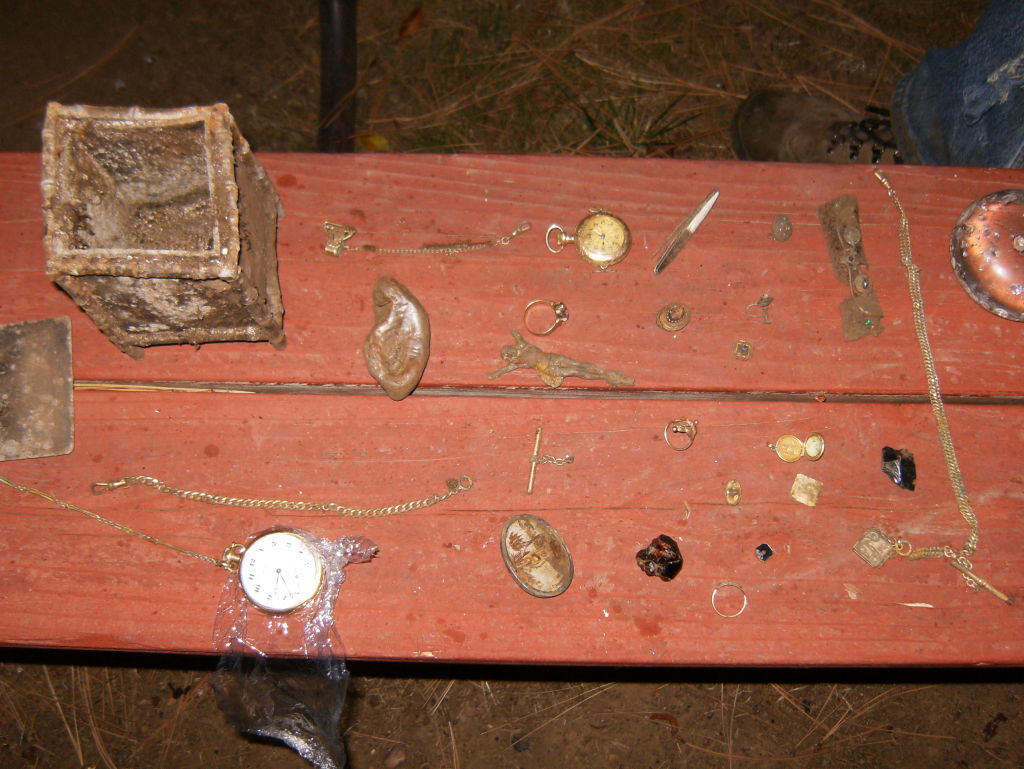