We are helping three different miners right now in three different states which have had people top file on their claims. This is a common call we receive and would like to provide some education on the subject. 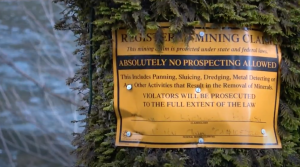 A “top file” is a label miners use when someone tries to claim over an existing and valid claim.
Many times these over-filers or top-filers result in dangerous situations, physical threats, threats of lawsuits, destruction of property and so on, especially if it’s a really good claim and the top-filers start actively mining it and taking the minerals.
Even I, (AMRA’s President) have been top filed on my favorite mining claim many years ago.
First, let’s discuss the steps needed for a mining claim to be valid in the courts, mining districts and federal government’s eyes:
*Land must be open to mineral entry, not withdrawn for a national park, national monument or the like.
*Land is in the public domain (generally meaning forest service managed or BLM managed lands), not private property.
*Is not claimed by another. We’ll address this below in detail.
* One must make a valuable mineral discovery from mining it, like gold.
*A discovery monument needs to be erected. This can be as simple as stacked rocks where you made the discovery or a post, just something to indicate where you made the discovery. We recommend you take a picture of this at the time of the discovery with the date on the picture.
*The claim should then be drafted up with the actual mining claim paperwork (from BLM) and the discovery paperwork recorded at the county. It is not a requirement for you to record the BLM paperwork initially, it will however save you a step and it is easy to obtain the 2 page BLM claim form on-line.
*The claim paperwork, with the county stamp should then be taken to the BLM for filing of the mining claim.
Note: one can “file” the claim with the BLM first as you have 90 days (in most states) to record with the county but most litigation we’ve seen going back a hundred years hinges on he who recorded with the county first is generally regarded as the owner and recording at the county level first also saves you from having to take the BLM paperwork back to the county for a stamp, then sent/taken back to the BLM with the county stamp for the claim file.
*Once filed, the claim boundaries should be marked with wooden corner posts delineating the corners of the claim and a sign, with the paperwork erected on the claim.
Know that the BLM will take your money for almost anything you try and claim. We’ve seen some pretty alarming claims BLM accepted and their statement is always the same “it is between you and the other entity who claims ownership” or “it’s a civil matter between you and the other guy”. We’ve actually debated filing a mining claim on the state capital lawn to see if they’d let us file a claim there…no kidding.
The BLM was created by Congress to “manage our public lands” and therefore we like to discourage folks from using the terms “BLM land” or “USFS land”. Neither agency owns the public lands, they simply “manage” our lands for us. The BLM, as we have been exposing for a few years now is over 8 years behind in the simple, clerical task of checking land status on mining claims filed. 8 years behind on a simple 5 minute clerical computer check. Why again do we pay billions for the BLM? They’ll take your money no problem. Several states charge property taxes on mining claims, which are recognized as real property like CA. If after 8 years BLM gets off their butts and checks the land status, then declares the claim “null and void”……is the BLM responsible for reimbursing the claim owner for 8 years of taxes and fees paid which would be thousands of dollars? After-all, a simple 5 minute clerical land status check would have caught that 8 years ago and the fees and taxes would not have been paid if the BLM declared the land could not be claimed. This is what we refer to as a fiasco and has “class-action lawsuit” written all over it.
Until there is accountability within the USFS and BLM, we will continue to have top filers and massive claim problems. In order to stop this, a change in the electorate needs to happen in Washington DC. Think stuff like this isn’t political? We laugh at those who think politics don’t play a role here, it IS the reason we have problems with mining claims, plain and simple. We are still very actively working on our USFS/BLM/EPA accountability act, similar to the VA Accountability Act which was passed under the Trump Administration. More about that later…..
We are actively editing our “how to file a mining claim” series and it’s quite detailed and frankly is the toughest one we’ve ever edited. It’s an important video series and covers all kinds of things like what is discussed above. It is a multiple part series, Q&A of frequently asked questions, legal scenarios and actual real life, click here, live screens on researching claims using the MLRS system and Master Title Plat webpages.
We hope that helps to slowly educate you and we want to remind folks AMRA operates on donations and one way to help is to make a donation, or attend our outings. Simply click on donate on our main page if you’d like to help the miners legal fund.