We were just made aware of this article written by Marty Trillbaase, a so called editorial writer for the Lewiston Tribune. He calls the miners criminals and even calls me a public lands gangster. Now, I’ve been called many things in my life, but comparing me to a bank robber and murderer is nothing short of slanderous.

This is my letter to the Tribune.

We urge you to send the editor a short email telling them to publish my letter and opine on your thoughts about this offensive publication.

Here is their email address: 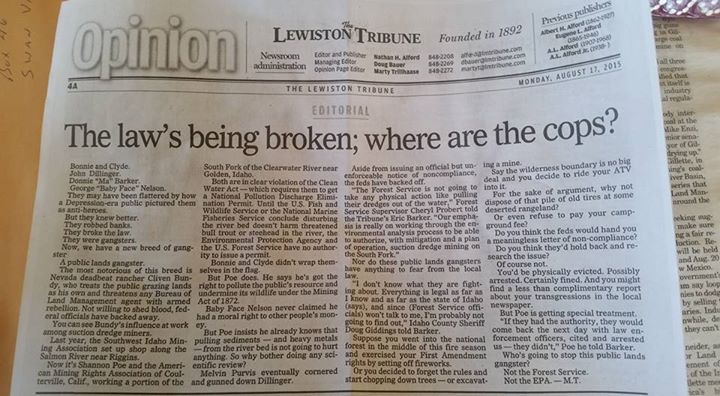 Tribune writer Marty Trillbasse recently wrote an editorial piece about small mining on the South Fork of the Clearwater and attacked myself, Shannon Poe which was not just factually wrong, but called me a “public lands gangster”. He compared me to Baby Face Nelson, Bonnie and Clyde, Ma Barker and John Dillinger, murderers and bank robbers. Not only is this highly offensive, but it is deeply slanderous. Seems this “editorial” writer is taking a page straight out of Saul Alinsky’s Rules for Radicals. Alinsky writes ‘Pick the Target, Freeze It, Personalize It and Polarize It.’ Alinsky also wrote “Power is not only what you have but what the enemy thinks you have.” This is what the EPA uses, power they do not have. Trillbaase is trying to promote propaganda against small miners on the SF Clearwater by spouting completely false statements concerning the CWA (Clean Water Act) and states scenarios which are absurd at best. He states an NPDES (pollution discharge) permit is required from the EPA to suction dredge, but he fails to mention the fact that the Supreme Court of the United States has already determined that not only does the EPA not have the authority to demand this, they have been told that suction dredging results in “incidental fallback” and “deminimus impact”. A suction dredge works very similar to the way a vacuum cleaner works, it cleans the river by vacuuming up gravels, cleans them and puts them back into the water. Suction dredges are small, typically operate with a lawn mower sized engine and do not pollute period.
Incidental fallback is clearly defined in several cases, Tulloch and Tulloch II and the South Florida Water Management District to name a few. There are numerous others, but hopefully this man will do some research and attempt to seek out the facts on his own. In a 9-0 ruling by the Supreme Court, Justice Ruth Bader-Ginsberg stated ‘if one takes a ladle of soup from a pot, lifts it above the pot, and pours it back into the pot, one has not “added” soup or anything else to the pot.’ Suction dredges do not add anything to the waters, they remove the pollutants and other heavy metals such as gold. There have also been over a dozen studies, performed by accredited agencies, biologists and independent companies which conclusively prove suction dredging does not harm fish or fish habitat. Many of these studies have been performed by United States Government entities such as DFG (Department of Fish and Game) using tax payer dollars. They have all shown “deminimus impact” on anadramous fish and anadramous fish habitat. Several of these studies even show improvements on the fish habitat.
Here are some simple facts about suction dredging:
Suction dredging removes 98% of the mercury from the waters.
Suction dredging lifts gravels from the river, cleans them, and deposits them back into the stream approximately 20’ to 30’ from its original location.
Suction dredging removes nearly 100% of the other heavy metals and contaminates from waterways such as lead, iron, discarded trash and fish hooks.
Suction dredging loosens concretized gravels promoting better spawning grounds for fish.
Suction dredging is not allowed during spawning seasons.
Suction dredging creates deeper pools in which fish can proliferate with cooler waters and provides cover from preying species.
In California, the leftist controlled congress enacted a moratorium on suction dredging back in 2009 to perform additional studies even though many, many studies had already conclusively proven suction dredging does not hurt fish or fish habitat. This moratorium was sponsored, promoted and pushed by a radical environmental group called Sierra Fund. They received a government grant of over 5.5 million dollars (your tax money) to dredge with an ineffective dredge under the guise of removing mercury. Their dredge removes 84% of the mercury, modern suction dredges remove 98% of the mercury. They are currently the only entity in California allowed to dredge. Suction dredge permits also provide jobs, boost local economies such as Elk City and Grangeville with the purchase of hardware, food and gasoline. If you are politically aligned with the politicians, you get to dredge with tax money, if you are not, you are demonized, like these two writers have done.
The benefits from allowing small miners to clean the streams is beneficial to the Idaho fisheries. This is why the State of Idaho and the Department of Water Resources has been issuing permits for decades. All of the miners who dredged during this short, one month season on the South Fork had valid Idaho State permits.
The simple facts are that suction dredging does not, and has not killed fish, nor does it adversely affect fish habitat. I urge this man to show any study, ever, in which one fish was killed by a suction dredge. They can’t, because it does not happen. It would appear as though some do not want gold for their computers, cars, I-phones and the Space Shuttle. Opinions are fine, propaganda and falsities by a newspaper has no place in journalism and this man should apologize to all the small miners they demonize.