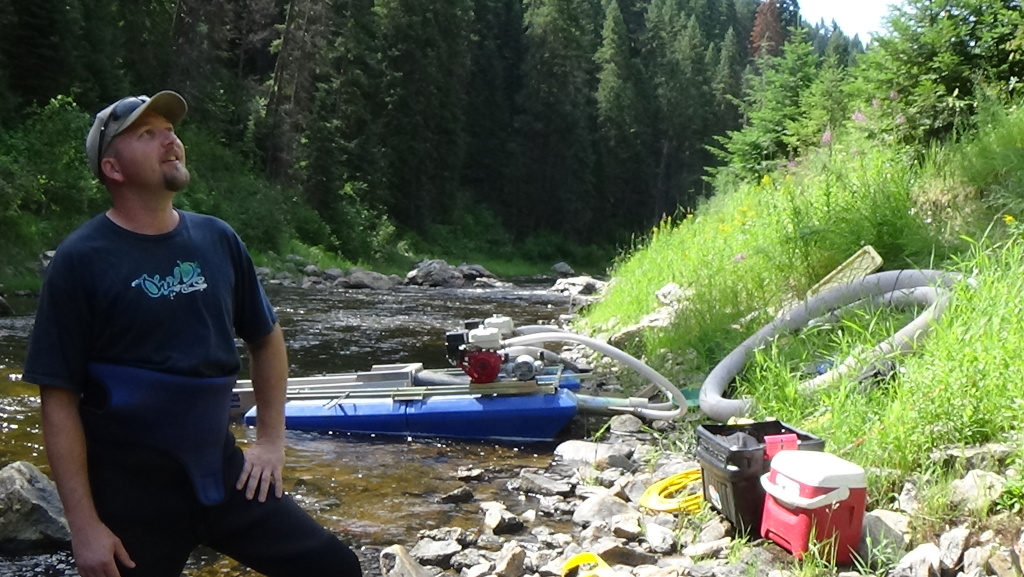 As you are undoubtedly aware, many management and regulatory agencies are going full speed to stop suction dredging.  The USFS is no different and has proposed a new scheme to restrict the number of dredges they will allow in Northern Idaho down to just a handful.  They are claiming they need to do this because they don’t have the time to process the forms.  That’s right, the same agency being paid by your tax dollars to manage your lands is saying they are too busy and it is too time consuming so they need to just limit the dredges to make their lives easier.

We have been fighting in Idaho for over two years for your small miner rights and will continue to do so, but need your help.

Imagine you are a mining claim owner on the SF Clearwater and you rely on that river’s very, very short dredge season (one month) to supplement your income.  Now imagine you aren’t one of the 15 permits they will look at because they claim they are too busy.  There are approximately 150 suction dredgers who could dredge their claim on that river.  This is not just illegal, but blatant discrimination. The USFS was created to manage YOUR lands, not THEIR lands.  Fed up yet?

We stand up for you all because it is the right thing to do, and when we send out these calls to action, we really need your help.  Click on the link below and send an email.  Don’t just complain, send the email.  We have made this as easy as we possibly could for you, so step up and take the 30 seconds to be heard.

All you need to include in the email is you oppose the newly proposed “small scale suction dredge project”.  You can add anything you’d like to it, but it is important if you oppose further tyranny and send the email.

Below is a copy of our letter so you can understand just what they are doing.

HERE for the email link

On behalf of AMRA’s members (who are valid mining claim owners on the SF Clearwater and multiple other waterways in Idaho) and the thousands of small miners we represent, we are formally opposing your “small scale suction dredging project”. This is an illegal discrimanatory scheme to limit the number of suction dredges allowed to mine their validly held Federal Mining Claims using the most efficient, and environmentally sound method of retrieving the valuable minerals therein, suction dredging.

As you will undoubtedly recall, last year we had interactions with your Geologist, Clint Hughes on the SF Clearwater and were confronted with the Hoot Owl fire restriction to stop the dredges from operating last year. That scheme of comparing a dredge to a timber falling operation and demanding we shut down at 1pm daily was quite frankly, desperate and reprehensible. In that restriction, you allowed for a running generator in camp as long as the ground was cleared in a 3 foot circle around it, but claimed a dredge sitting out in the middle of the river would start a fire. The dredge I was operating was more than 51 feet from the nearest piece of vegetation and our engines have the most advanced spark arresters available. Using this logic, all jet boats on the Salmon River would have fallen under this scheme and when we pointed out that you would have been required to shut them down as well, you retracted that scheme. We are thinking that would not have been well received by the local towns which use the boats as a primary source of revenue. The very next day, Mr. Hughes showed back up to harrass the miners again demanding they obtain POO’s or face arrest. When one wrongheaded strategy doesn’t work, use another.

Plans of Operations, “POO”, are the responsibility of the miner to determine if he/she is creating a “significant disturbance”, not the Ranger. Small scale suction dredging does not create a significant disturbance and therefore does not “trigger” the NOI nor the POO process.
We’d like to quote some items from your own USFS 2810 documents:

2817.03 – Policy
The statutory right of the public to prospect, develop, and mine valuable minerals and to obtain a patent shall be fully honored and protected.

The regulations at 36 CFR Part 228, Subpart A shall be administered in a fair, reasonable, and consistent manner and not as a means of inhibiting or interfering with legitimate, well-planned mineral operations.
2817.1 – Notice of Intent to Operate

Subject to certain exceptions (36 CFR 228.4(a)(1)), a notice of intent to operate is required from any person proposing to conduct operations which might cause significant disturbance of surface resources and who has chosen not to file an operating plan. A notice of intent to operate is not intended to be a regulatory instrument; it is a notice given to the Forest Service by an operator which describes the operator’s plan to conduct operations on National Forest System (NFS) lands. The trigger for a notice of intent is the operator’s reasonable uncertainty as to the significance of the potential effects of the proposed operations (70 FR 32713, June 6, 2005).
2817.11 – Determination of Significant Resource Disturbance

The determination of what is significant can come only from a fair, reasonable, and consistent evaluation of proposed operations on a case-by-case basis. The term, significant, is site-sensitive. A particular surface resource-disturbing activity in one area, such as flat sage brush-covered ground, might not be significant, while the same operation in a high alpine meadow could be highly significant.

The phrase “will likely cause significant disturbance of surface resources”, which triggers the requirement of submission and approval of a proposed plan of operations (36 CFR 228.4 (a)(3)) means that, based on past experience, direct evidence, or sound scientific projection, the District Ranger reasonably expects that the proposed operations would result in impacts to National Forest System lands (NFS) and resources which more probably than not need to be avoided or ameliorated by means such as reclamation, bonding, timing restrictions, and other mitigations measures to minimize adverse environmental impacts on NFS resources (70 FR 32713,
June 6, 2005).
2817.2 – Plan of Operations

Submission of a proposed plan of operations is required from all operators who will likely cause a significant disturbance of surface resources. Plans involving mining claims subject to Title 30, United States Code, section 612 (30 U.S.C. 612) are also subject to the restrictions of that act, and those restrictions should be incorporated in the approved plan. The plan must be submitted to the District Ranger. Prior submission and approval of a proposed plan of operations is not required if the proposed operations will be confined in scope to one or more of the exempted operations listed in Title 36, Code of Federal Regulations, section 228.4(a)(1) (36 CFR 228.4(a)(1)).

There is little doubt anymore that the USFS, Clint Hughes and yourself are now using illegal and profoundly immoral actions to try and stop suction dredging, not based on anything scientific, but based on what must be political ideology. Suction dredging has been conclusively proven to be “less than significant” in regards to impact on the rivers in the more than 2 dozen independent, accredited and Government studies conducted over the past 30 years. Suction dredging does not discharge any pollutants and recovers 98% of the legacy mercury (if present) in the waterways. Suction dredging creates refugia, cooler water for fish in deeper holes and provides excellent protection from predators. There is not one study, ever, which shows one fish being harmed by suction dredging. Suction dredging simply cleans the gravels in the waterways much like a vacuum cleaner on your carpet. Dredging loosens compacted gravels and it is not allowed during spawning season. Even the Supreme Court of the United States has clearly ruled that suction dredges do not discharge pollutants. If you dip a ladle into a soup pot, lift it out and pour it back in, are you adding any pollutants? Of course not, and this is precisely what the Supreme Court correctly ruled on. Even the EPA has decided to back down on the NPDES permitting scheme on the SF Clearwater. It is not required as proven by law.

The SF Clearwater is not a spawning river Ms. Probert, it is a throughway for fish to swim through to reach their spawning grounds, which again, dredging is not allowed during spawning season.

We have spent quite a bit of time reading your proposal and would like to highlight what we believe to be the most significant part of your 30 page proposal, it is located on page 1-4 under “Need” in section 1.2, it reads as follows:
Need: Each year the Forest Service and the BLM must individually processes multiple POOs for small-scale suction dredging within the project areas. This involves preparation of environmental analysis to comply with the NEPA, and consultation with the U.S. Fish and Wildlife Service (FWS) and the National Marine Fisheries Service (NMFS) to comply with Section 7 of the Endangered Species Act (ESA). Processing each action individually is time consuming and inefficient.
Processing each action individually is time consuming and inefficient. So the USFS doesn’t have the time to process the paperwork it is specifically paid to do and therefore is creating this entire scheme to limit the number of dredges because they don’t have the time to process each action? The USFS is funded by our tax dollars, the agency created to manage our lands. You work for us Ms. Probert, not the other way around. You do not pay my wages, but I pay yours to manage the public lands for us. I make my money by mining my Federal Mining Claims, which grants me specific rights, rights you, and other within the USFS selectively ignore. The mining acts were signed into law by the President of the United States and validly passed by Congress, the way our Representative Republic was created to work. It was not for management agencies to circumvent Congress and make up their own rules to oppose legitimate forms of income because they simply don’t like them.
This latest scheme, the “small scale suction dredge project” denies legitimate claim owners and legitimate miners from providing for their families, to send their children to college and to even put food on their tables. Many miners rely on the income from their legitimate suction dredge operations on their legitimate Federal mining claims for their sole income or to supplement their income. We had mentioned your Hoot Owl scheme would have affected the local communities had you in fact had to shut down the jet boats. The suction dredge project will indeed affect the local businesses adversely. Small miners spend millions of dollars each year in the gas stations, hardware stores, restaurants and other local businesses.
Your proposal, due to the USFS not having the time to process simple forms is nothing short of discrimination. If this proposal is accepted, who will be the recipients of the permits and who will not? If a Native American is a mining claim owner and is denied a permit because you don’t have the time to process a permit, is that discrimination? How about if it was a disabled man or woman? What about an African American?
I would caution you Ms. Probert, your failure to understand, or know the laws of the United States are no excuse for you to violate my, or any other miner’s rights. Because of this, we have contacted every single Senator and member of Congress we can over this blatant ideology driven attack on small miners. We are going to the media, they need to know this story. We are also researching and considering every single legal challenge and civil remedy available to the people you are adversely affecting with your agenda.

In closing, we vehemently oppose this blatant discriminatory action you are proposing and demand this be retracted.