IDAHO DREDGERS SEVERELY RESTRICTED BY THE EPA WITH NEW PERMITS 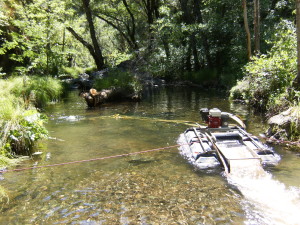 DREW NASH • TIMES-NEWS Jim Kepner, a member of the Gold Prospector Association of America, poses next to his three inch gold dredger Tuesday, August 6, 2013 at his garage in Twin Falls.

First there’s water and earth to move. Then there’s the suction dredge they must haul to the river and pull against the current. Not to mention finding an unclaimed stream that hasn’t had all its gold nabbed. Be sure, too, you’ve got your state permit.

Oh yeah, and don’t forget the hot dogs, tents and your permit from the U.S. Environmental Protection Agency ensuring you’re not violating the Clean Water Act or the Endangered Species Act.

That last one is a head-scratcher to Brad Dey, president of the Snake River Chapter of the Gold Prospectors Association of America. The state permit has worked well for decades, he said. It was a hoop to jump through, but it wasn’t a burden.

“Unfortunately, there’s no more hoop; they’ve just completely shut it off,” he said of the new EPA permit required since May.

The permit is necessary to protect water quality, preserve the habitat of Idaho’s endangered species and comply with the Clean Water Act, say EPA officials and conservationists.

Angry miners aren’t correctly thinking about the permit that the Idaho Conservation League pushed the EPA to implement here, said Justin Hayes, the league’s program director. It is a shield that gives them a legal and environmental certainty for their exploration, Hayes said.

Many miners, though, say the permit — a National Pollution Discharge Elimination System (NPDES) general permit — is a federal overreach, creates a lengthy and complicated process and closes or restricts many popular gold streams. It is keeping many miners from doing what they love, Dey said.

Of the 911 suction dredgers with state permits, 60 have obtained EPA location-specific permits.

She said the many calls and emails she’s fielded make her think gold miners misunderstand the permit. Yes, it’s more restrictive and robust, DeGering said, but the agency is not maliciously targeting miners.

“A lot of miners think we are picking on them and nobody else. It goes back to the Clean Water Act, and the discharge of pollutants requires a permit.“

Out of thin air?

Gold suction dredges are floating vacuums that suck up and spit out dirt and water, leaving flakes of gold behind. The Clean Water Act defines them as point sources and the rock and sand as pollutants. Idaho was one of the last states to implement EPA dredging regulations through the NPDES process.

“It wasn’t as if we made it up out of thin air. It was necessary all along, and we were behind the times.“

The state gold-dredging permit is akin to a fishing license, said Aaron Golart, coordinator of the stream protection program in the Idaho Department of Water Resources.

Miners apply, agree to comply with state rules and observe its list of open, seasonally restricted and closed rivers. They are allowed to use a motor of 15 horsepower or less and a nozzle no more than 5 inches wide. They are not allowed to affect the riverbanks, Golart said.

The EPA and state do not share the same catalog of open, seasonally restricted and closed rivers, he said.

“I’d say (the EPA) permit is more robust, and it involves more paperwork and filling out more detailed information,” he said. “Ours is a form you fill out, agree to follow the guidelines within the instruction booklet, and you are free to go anywhere in the state.“

The EPA’s permit, for example, stipulates that a dredging sediment plume can’t exceed 500 feet, and miners must be at least 800 feet apart. The state does not have a sediment plume requirement and only requires miners to be 100 feet apart, Golart said.

The NPDES permitting system wasn’t implemented because of increased mining or any EPA-documented issue, DeGering said.

It’s all centered on enforcement of the Clean Water Act and the Idaho Conservation League’s threat to sue the EPA for not regulating miners’ discharge, Hayes said. Those threats came from meetings between the EPA and the League, Hayes said.

In 2010, the EPA issued a first draft of the permit and its regulations, DeGering said. Officials took comments, held meetings and eventually issued a second draft permit in 2012. This April, the permit was finalized.

“If a suction dredge is in the stream at a time when we have eggs in the gravel … it’s easy to imagine suction dredge mining interrupting endangered fish and probably killing eggs,” said David Mabe, Idaho director for the Fisheries Service.

The EPA first proposed a general permit that would cover most Idaho areas for dredging, but the Fisheries Service couldn’t approve any activity that could so broadly affect listed species, Mabe said.

The EPA asked, “What’s easy?” he said. “Well, the easiest thing to do is to say that you won’t allow suction dredging in areas that’s likely to have our species in it.”

If a miner wants to dredge in critical habitat, DeGering said, he must obtain an Endangered Species Act consultation — a lengthy process examining where and when a miner could work and not affect species of concern, such as not dredging during spawning season.

The EPA and other agencies have approved regulated dredging of Lolo Creek and Moose Creek in northern Idaho.

On Lolo Creek, suction dredgers were approved for specific activities at an exact place and time away from spawning areas, and a biologist will be able to examine the operation, Mabe said.

“There still may be some take (damage), but overall we think they’ve put together the (most) protective activity they can,” he said.

Twin Falls resident Jim Kepner bought his used 3-inch, 5.5-horsepower dredge for $500. New dredges cost up to $4,000. But Kepner’s dredge has sat unused in his garage for two years.

He and several other miners bought a claim on the Payette River for $2,000 but were denied access to it when the EPA’s permitting started because of critical habitat for bull trout, he said.

Kepner said he’s dredged gold for 45 years and doesn’t make much money from it. It’s just his hobby.

The Snake River chapter of the Gold Prospector’s Association has 150 members, many of whom enjoy trips into the mountains recreating, camping and having potlucks, he said.

“It’s hard work. It’s not for the weak or really old. I think people enjoy getting out, and I don’t think we destroy the environment.“

Kepner recently received an EPA permit to dredge along the Snake River near American Falls. His hopes aren’t high, though. He said many of the rivers with the best gold now are EPA-regulated or off-limits because of critical habitat and endangered species.

This has forced miners to shelve their dredges or mine in mediocre areas, hoping the EPA’s process loses its teeth or at least becomes smoother, he said.

DeGering agreed that the EPA permit restricts some access, but it’s hard to quantify how much. The EPA only requires a permit for the owner of a dredge, not for each person operating the dredge, as the state does.

Since May, the EPA has issued permits for about 60 sites. Those 60 permits could be held by 60 people or 20 people, though, as the 150 miners who have applied often applied for more than one area.

The environmentalists who lobbied for the Idaho permit don’t understand dredging, Dey said. People think miners pollute, destroy habitat and move massive amounts of material, but suction dredgers may have the smallest impact on a river, he said.

Hayes disagreed, saying dredging can harm water quality and destroy fish habitat. If done poorly, it can be “very detrimental,” he said.

He said he has little sympathy for miners who complain that good dredging rivers are subject to the lengthy ESA consultation process.

If your recreation destroys habitat for endangered animals, “your recreational pursuit isn’t going to happen,” he said. “If all the gold is beneath the sockeye ‘redds’ (spawning areas), that’s too bad. That gold is staying there. Threatened and endangered fish take precedence over recreationally destroying riverbeds.“

Dey questions why the Clean Water Act categorizes stirred and released river sediment and water as pollution — the same as incinerator residue, sewage, garbage and chemicals. “There’s no science to prove we endanger anything,” he said.

“They kind of scare you to death because if you read into the permit, they can really fine your butt and put you in jail,” Kepner said. “ … I wouldn’t do nothing illegal, so we haven’t been this year.“

Idaho is a big state, and miners can hide in remote areas. But when they are found, the courts won’t look favorably on their activities, Hayes said. Under the Clean Water Act, environmental groups can act as enforcement agents and send a 60-day notice of intent to sue the EPA in hopes of compelling the agency into action.

“We did that a year and a half ago with a small gold mine in the town of Atlanta (in Elmore County), and their failure to comply … has resulted in a $2 million penalty for them,” he said.

When miners buck the EPA permit, the result will be more aggressive enforcement, Hayes said. “People would be better off if they comply with the permit.“

So far, the EPA hasn’t filed charges against illegal dredgers, instead focusing on education and outreach, said Jim Werntz, operations office director for the EPA in Idaho.

Kepner and Dey complained that the environmentalists who threatened the EPA with a lawsuit now are enforcing the new rules. But DeGering said tips and complaints to the EPA come from a surprising number of sources, including other miners.

The Conservation League relies on volunteers observing, taking photos and video and “keeping track of where, when and who,” Hayes said. The league responds to tips of illegal dredging but views “enforcement of the law as a last resort.“

Mabe said miners are justifiably intimidated and frustrated, but dredging in critical habitat isn’t completely off limits. A group might have an easier time navigating the process than an individual would, he said.

EPA is working through growing pains with the permit and hopes to approve permits more quickly, DeGering said.

“We want folks to apply and ask questions and be patient with us.”