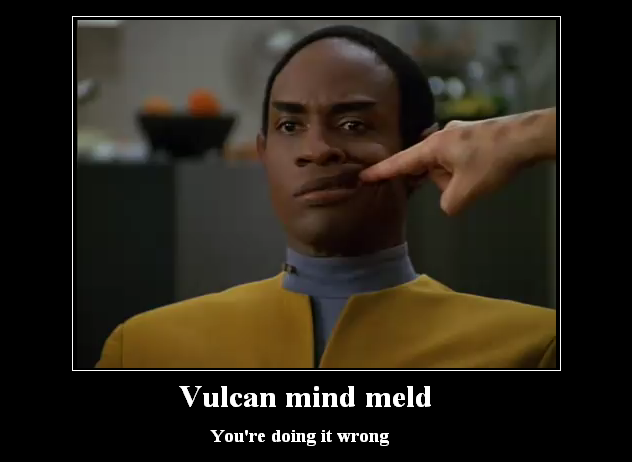 We are back from our outing on the NF Yuba and heard some pretty hilarious rumors we’d like to share.

We are surprised we didn’t hear we are taking over the internet, selling babies on the black market or causing Hillary Clinton’s poll numbers to drop. Since we cannot perfect Spock’s Vulcan mind-meld, we don’t know what these people are thinking in even bringing these kind of crazy things up, but we will continue to practice the mind-meld, it might come in handy with some of our Senators who oppose mining.

These kind of things, while quite humorous, do not help the small mining community one bit, they only cause division and confusion. And while blatantly and easily proven false, we are publicly coming out today to say…..Uh, no, we are not causing PLP’s internal issues, no we are not selling babies on the black market, no we are not plotting some kind of takeover of MMAC, nor are we colluding with Pat Keene on anything. Never have, never will. We hope, just as much as you do that the internal issue’s between them gets resolved.

If anyone can figure out how it is possible to just takeover another 501 C3, please let us know………..as that makes us immediately think Sierra Fund and the Clinton Foundation. The small mining community could use those millions for litigation to stop the tyrannical, out of control governmental regulations. If anyone tried to take over AMRA, ummmmmm, we would just say NO and they would have to go away by law. It is not possible to takeover another 501C3 without the board’s approval and a consensus of AMRA members and likewise with PLP. Or in other words, not a chance in hell of anyone taking over AMRA.

So for those hearing these outlandish and ridiculous things, no, we have zero to do with either of those two organizations, their troubles or their very public infighting.

We have much bigger things on our plates right now like….

The CEQA case in CA
Idaho USFS, EPA, IDWR and DFG
Brandon Rinehart’s legal bills
Partnering with other groups like we did this past weekend
Bringing other groups into the fight with the mining community
Uniting the miners
The upcoming Miner’s meetings
Assisting the 3 separate gold clubs with USFS road closures
Assisting the 14 individual miners with USFS and BLM issue’s
Finding enough gold to pay our mortgage
Holding outings to raise money for litigation
Among a litany of other things we are working on.

Dang, we sure wish we could mind-meld though…

One thought on “Humorous rumors and Vulcan mind-melds”