We are frequently asked about dredging and have trained a lot of people how to dredge over the years. Dredgers have their own language (not universal), and when underwater they cannot verbally communicate so we have sign language. This is “our” language and it varies from miner to miner. 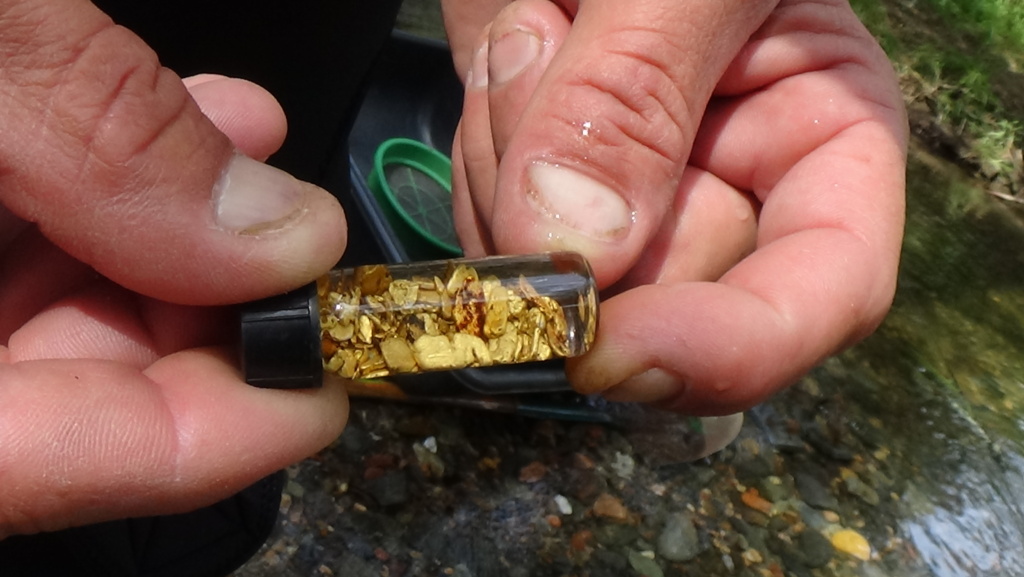 Here is our language:

Nozzle hogging: can be two things, one is where your partner (if two are diving together) hogs the nozzle and won’t let you dredge. Two, the nozzle operator is over-loading the box by running material too fast. Hey Don, you’re nozzle hogging the box again.

Corn-cobbing: this is where you dredge from side to side in the stream channel searching for the paystreak. Like eating a corncob. Jere, we are going to corn-cob the creek from over there to over here.

Gut punch: just dredging the “gut” of the waterway. The old timers’ only gut punched the creek and left the banks untouched.

Yum yums: Something we created a few years ago. Yum yums is referring to the orange old ground we know is loaded with gold. Found some yum yums down there.
Old ground: ground which has not been disturbed by any human interference. Dude, we are going to kill it, there is old ground everywhere!

Orange Juice: old ground, orange in color due to the high iron content. Hit a patch of old ground and turned the box orange.
Light the box up: filling the box with gold. After all that OJ, the box should be lit up!

Coffee creamer and creamsicle: Coffee creamer is typically an ash or clay layer on the bedrock. This can run from a few inches thick to over 2 feet thick (as on the SF Clearwater in Idaho) and is very rich normally. It is very dense and resembles coffee creamer. Creamsicle is a mixture of orange juice and coffee creamer. The dredge tender can normally tell just by looking at the back of the box what type of material the dredger is in from the color of the water. Hit a layer of creamsicle and its loaded!

Loading up: Running the sluice too flat and overloading the box. Hey Mike, the box is loading up, you’re either nozzle hogging or it’s too flat.

Pringles: bedrock slabs going across the waterway (90 degree angle to the water flow) and stacked up like Pringles potato chips. The bedrock is perfect, it’s pringles!

Going cave man: cave cutting the hole. This is one of the most dangerous things a dredger can do to his partner (ask Brandon Rinehart

😉). Cave cutting is cleaning the bedrock up under a wall and leaving a cave with over-hanging rocks. Steve, you went full caveman, now I have to fix it ya butt-cheese.
Blaster: a high powered water sprayer. Got a new blaster that blows the gold out of the cracks!

Speed clips: S shaped clips we have on all 4 corners of our dredge for quickly moving the angle it is sitting. It beats tying up the dredge with a rope every time you want to move it a few feet. We tie loops in our ropes about every 12” and have 3 speed clips on each corner. Want to move the dredge? Clip a new clip on the next loop, hook it on the ring and then unhook the other one, dredge moves forward by itself and you’re back to work.

Bedrock is tweaker: rotted bedrock like a tweakers teeth. Sparky, that bedrock is so tweaker, it just crumbles.
Going Lema: This is a new one we just created and refers to the dredger throwing their rocks in the exact location you are going to dredge, therefore will need to throw them again………hopefully “away” from where you are going. Jim, you’re going Lema again.

Smoked out: when your water flow is dropping or you create a cloud underwater and cannot see. Another very dangerous situation, especially if you are running a large dredge and get your hand in front of the nozzle. A good 6” dredge can break a finger and cut you up pretty bad, an 8” dredge will cut your finger clean off if it pulls a rock from 2’ and your hand is over the nozzle. Can’t see a thing, I’m smoked out.

Juice the mask: adding Johnson’s baby shampoo to your mask. Johnson’s is the single best thing for keeping a mask unfogged. We have tried every treatment known to man, or sold by scuba stores. Johnson’s is by far the best, doesn’t hurt the eyes and is cheap. We keep a small squirt bottle on the dredge at all times. Squirt or drizzle some in the mask, rub it on all glass surfaces and rinse one time. Mask is clear for two hours. Juice me please.

Boulder-bound: pretty self explanatory. You are dredging in an area where there are huge boulders you cannot move. Can’t do much more, we’re boulder bound.

Holding your hand out like your shaking hands, but in a fist moving your wrist from side to side. Indicating you want the blaster.

Holding your hand in a fist with your fingers down and rolling your wrist from side to side. Indicating you want a pry bar.
Holding your hand in a fist, arm extended and moving your entire arm from side to side and pointing with your other hand. Indicating you are holding the dredge nozzle and pointing is the direction you intend to go with the nozzle.

Moving both hands over one another like the “safe” signal in baseball. Absolute NO or stop immediately.

So the next time you hear a dredger say: Bro, we were killing it in there until Chris went full Lema, after I tossed that, fixed his caveman I got a bit boulder bound in the pringles but hit a nice layer of creamsicle and lit it up. The bedrock went tweaker as I was gut punching it, smoked myself out for a bit, but it cleared pretty fast. Can’t wait to get back in there!

Just know it is a dredge miner creating his own language…………….