Day 4 and 5 of the Chinese Corona virus lockdown at the AMRA house. 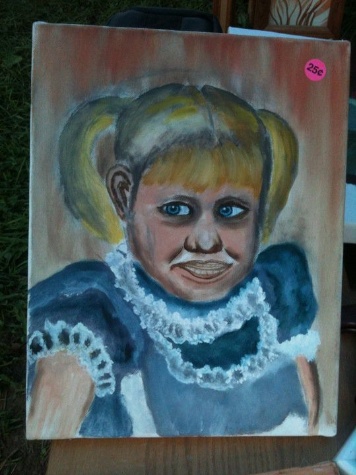 Gotta apologize for not posting yesterday, things got a tish-bit hectic…more on that in a bit.

Haven’t gotten any requests for my paintings yet, but decided to do a few more to impress folks with my talents and hopefully will get a nice side-business while on lockdown.

Here’s a near perfect rendition of a very young Hillary Clinton, think the upper lip is especially realistic. Am sending it to her free, no charge and hope she’ll love it. Am starting to really recognize my mad painting skills.

This one is probably the best I’ve done. It’s of Jane Fonda. I’ll let it speak for itself as I know I nailed it. 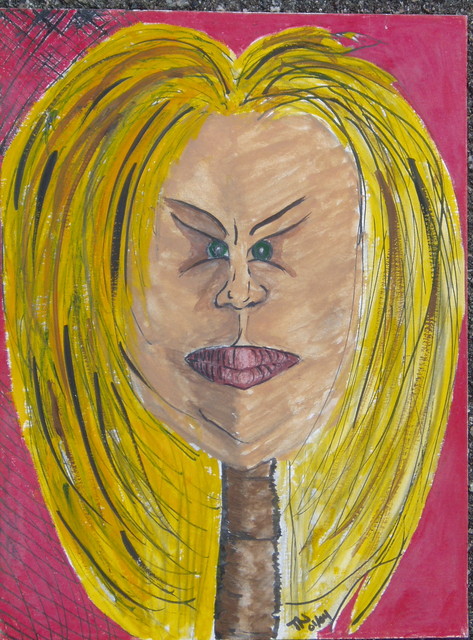 The last one of the day was of that Debbie Wasserman-Schulz lady in politics, I guess the head of the Democrat party or some such. Note how I remarkably, and quite life-like nailed her curly hair! Proud of that one. 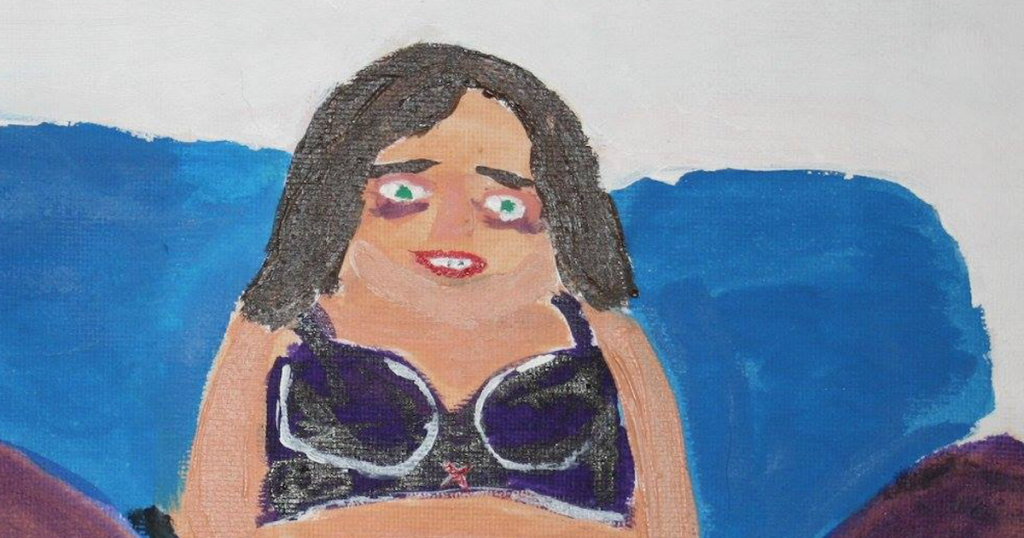 Finished the she-shed for the wife, she wasn’t as impressed as I thought she’d be. Hell, it has a sink, shower and all the amenities one could want. 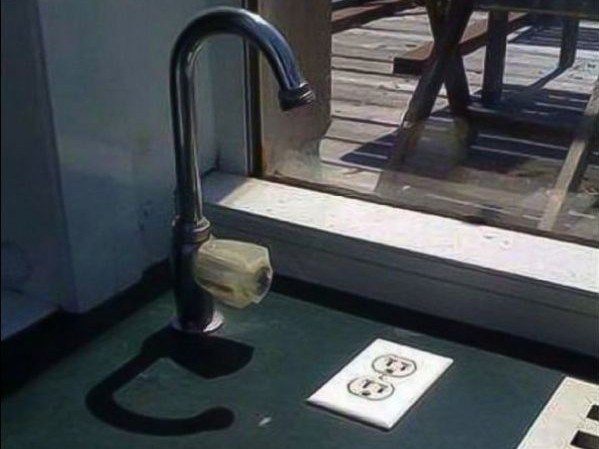 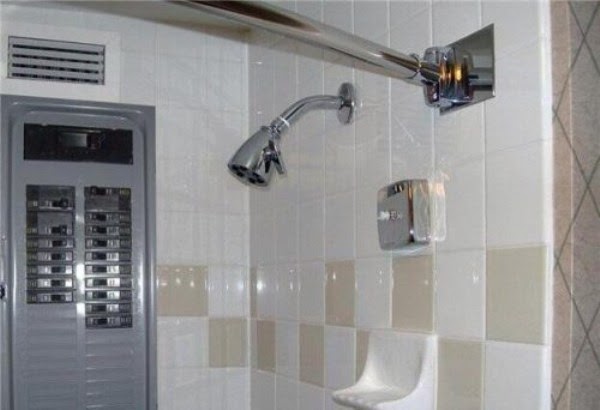 Had one of my brilliant ideas, since the wife loves wine (I don’t drink and don’t know squat about wines) I’d

download a recipe for home-made wine off the internet so the she would have an extra alcohol source if things really went south. Seems when I’m home a lot, she likes to drink. Recipe says you can make it right
in your own toilet like the one in the shed. Heard it’s super-delicious. Pruno they call it and it’s quite popular in prison I hear. Shout out to Donk for the recipe.

So after the completion of the shed, I moved four of my highly coveted cases of Spaghetti-O’s in there. Then, as I was moving in the cans of Spam, I noticed two cute little raccoons in the tree near the door intently watching me. 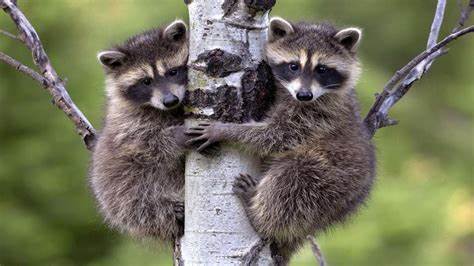 They were chattering and looked so cute, so fluffy. Well, I grabbed the hand truck, loaded up my cases of Top Ramen and headed back to the shed when I noticed that one of the raccoons was standing in front of the door and the other was still in the tree.

Now, what would a normal guy do in a situation like this?

I said “F off coon”, chatter and snarls. I was just about to grab a 2×4 and play whack-a-mole when the other little terrorist bastard came flying out of the tree and beat the crap out of me. 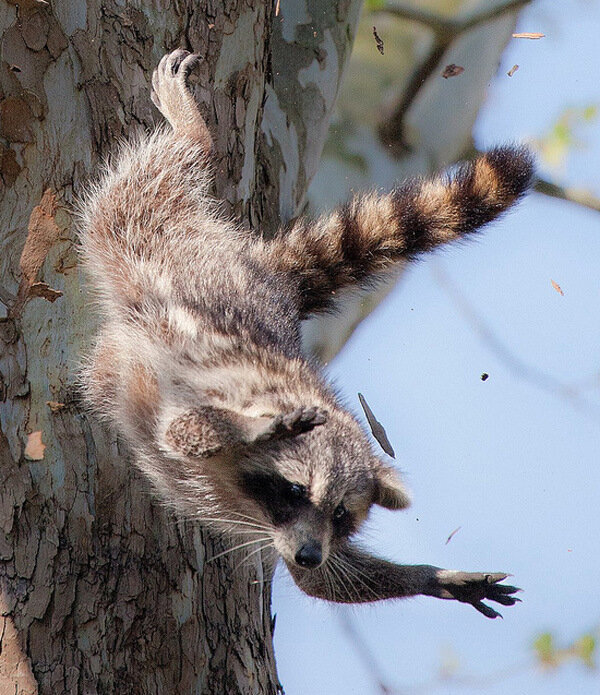 The other masked terrorist grabbed the hand truck and wheeled it into the shed slamming the door behind him and his evil twin as I lay bleeding on the lawn.

I named them Jack and Josh because they look like they are brothers, and two mean as hell brothers at that.

Well, the wife bandaged me up and I must say she seemed quite liberal with the mega-salt-water-wash (which she insisted was great for open wounds).

This is war now. Since I’ve watched two episodes of Seal Team 6 on TV I’m now highly knowledgable in military warfare and began plotting my takeover of this facility (military terms folks).

To scout the facility, I went full stealth and crept up near the shed. I could hear the shower running and one

of the little bastards, I think it was the Jackcoon was peering out the window with what looked like blood all over his face, but realized it was just Spaghetti-O sauce.

Well son of a b****h, little masked bastard was eating my stash!

I was going to need some body armor and a serious weapon. I donned my old dredge mask, 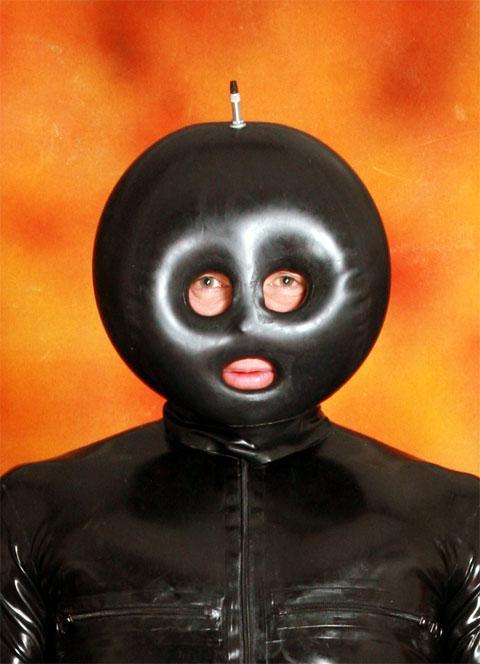 shoulder pads from high school, “borrowed” the neighbor girls soccer shin guards and geared up for battle. I knew I was going to have to be careful choosing a weapon as these coons were smart, devious and highly dangerous. I was thinking an axe first, but the previous close combat episode made me rethink that. I needed distance. I decided on a 10’ section of rope with a 5lb lead weight from my dive belt tied to the end. I’ve named it the “lead arm of death”. I figured I could swing it about, like a lasso, but with a block of death on the end.

After a bit of practice, I was pretty confident those hairy masked Taliban were going down…pro tip: use the body armor while practicing.

As I slowly and stealthily crept up along side of the house towards the shed…. I could see one of them again on lookout in the window, eyes darting right and left. Little did I know the Joshcoon had counter-moved me and when I was nearing the door, little devil-beast jumped me. As I frantically tried to brandish my death weapon, I didn’t have enough room to swing it and the damn rope became tangled in my legs so I couldn’t run away. Down I went and Jackcoon joined Joshcoon and together they gave me an old-fashioned ass-whooping. As I was approaching the loss of consciousness, I thought I heard two gun shots. Thinking the end was near and fearing the damn coons got to my gun stash….. blood running down my face, I saw the wife holding the two coons by the tail.

“Shannon, quit screwing around and come to dinner, you’ve already cut yourself today on the bird feeder and now you’re going to hurt yourself wrestling the dogs stuffed animals.

I’m pretty sure with all of the traumatic events, she is delusional, suffering from denial and it is her way of blocking out those images. I can’t blame her, she isn’t as tough as I am.

Well, that was quite a dramatic two days.

I did paint my episode with the devil-brother Jack-Josh devil-coons, think it turned out well. 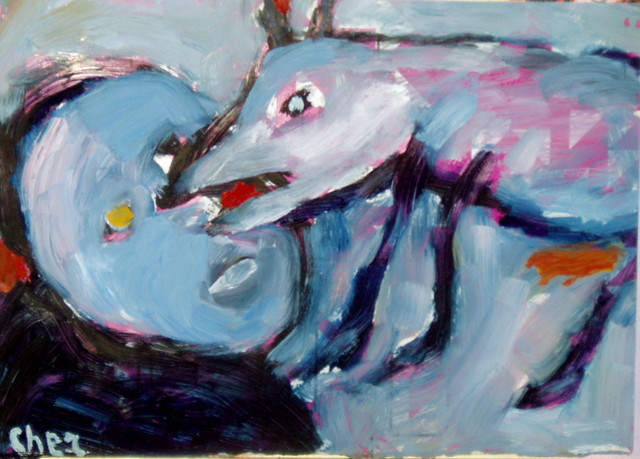 I hope to start the wine production tomorrow and now that President Trump has announced the Defense Production Act, I may work on my new invention for safety masks, need to do my part in helping America.

Stay safe, it’s getting wild out there.